After Ever Happy (Film)

The film was announced alongside the third and preceding film, After We Fell, on September 3, 2020, by returning series stars Josephine Langford and Hero Fiennes Tiffin.

A revelation about the past shakes Hardin’s impenetrable façade to the core — and then Tessa suffers a tragedy, putting their relationship on the brink. As the shocking truth about each of their families emerges, it’s clear the two lovers are not so different from each other. Tessa is no longer the sweet, simple, good girl she was when she met Hardin — any more than he is the cruel, moody boy she fell so hard for.[1]

In the fourth and final installment of the AFTER series, Hardin and Tessa are growing up and they may never be the same. Although they have defied all the odds, their next chapter will bring either a fairy tale ending or finally destroy their passionate yet toxic relationship. When a revelation about the past shakes Hardin’s impenetrable façade to the core—and Tessa suffers a tragedy—will they stick together or be torn apart?

Life will never be the same for “Hessa”.

The film was announced to be entering pre-production on September 3, 2020. It was announced alongside the third film of the series, After We Fell.

On September 8, 2020, the new director Castille Landon announced that she had picked out multiple filming locations, confirming that production would restart in 2020. The After Twitter account confirmed that the films were entering production.[1]

On December 18, 2020, filming for After Ever Happy and the After film series, officially wrapped. 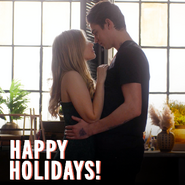 After Ever Happy - Official Teaser