Jennifer Beals is an American actress and former model. She played Karen Scott in After, but was unavailable to film the sequel After We Collided so her role was recast to Karimah Westbrook.

Jennifer Beals is an internationally renowned actress who has over 90 credits to her name, including critically acclaimed feature films and some of the highest-rated television series to date. She is currently executive producing and returning as a lead cast member in the revival of her hit original series The L Word: Generation Q. The highly anticipated series launched in December 2019 on Showtime. The ground-breaking lesbian-focused drama The L Word originally aired for six seasons. For her performance as Bette Porter, Jennifer received the prestigious GLAAD Golden Gate Award, as well as two NAACP Image Award nominations and a Satellite Award nomination. In 2012, Jennifer was presented with the Human Rights Campaign's Ally for Equality Award for her support of the LGBT community. Additionally, she and The L Word's Ilene Chaiken are set to executive produce the Freeform series "The Seven Husbands of Evelyn Hugo," an adaption for Taylor Jenkins Reid's acclaimed novel.

Throughout her accomplished film career, Beals has worked with many of the industry's most acclaimed filmmakers and talent. She co-starred alongside Denzel Washington, Gary Oldman, starred opposite Garry Marshall, Faye Dunaway, and Brendan Fraser. She was featured among an all-star cast including Dustin Hoffman, Gene Hackman, and Rachel Weisz in the crime thriller Runaway Jury. She also starred in The Madonna and the Dragon from legendary film director Samuel Fuller.

In 2019, she co-starred as Karen Scott in After, the film adaption of Anna Todd's worldwide phenomenon book series of the same name, alongside Josephine Langford and Hero Fiennes Tiffin. The film scored over $70 million dollars in the box office. Jennifer was set to reprise her role as "Karen" in the second film, After We Collided, but was unable to due to scheduling conflicts. She wrote a letter to the fans saying she was thankful for the opportunity to be part of the franchise and was excited to see Karen's journey throughout the film as a fan. Her role was ultimately recast to Karimah Westbrook. 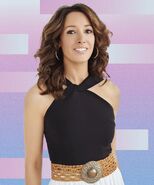