Karen Scott is a character in the After film series. She is currently portrayed by Frances Turner and formerly, Karimah Westbrook and Jennifer Beals.

Karen is the welcoming mother of Landon Gibson and the new wife of Ken Scott. Her marriage to Ken makes her the stepmother of Hardin Scott. Karen works to help Ken mend his relationship with Hardin.

Karen's engagement to Ken Scott, the chancellor at WCU, and the estranged father of Hardin Scott, causes more friction between Hardin and Ken. Hardin isn't thrilled about his father remarrying due to Ken's negative relationship with Hardin's mother. Karen's son Landon Gibson befriends Hardin's girlfriend, Tessa Young, and invites her to the engagement party. Tessa convinces Hardin to attend as well, and they are greeted by the happy couple that evening. Karen presents herself as a kind and warm woman with a desire to make her blended family work. She is doted on by Ken, who speaks highly of her in his reception speech. Karen sits with her fiance and son at the party.

At Christmas, Karen encourages Ken to reach out to his ex-wife Trish, who is town for the holidays. Karen wants Ken to invite Trish to their party. He obliges and reaches out to Trish who accepts, and Karen is proud of her husband for taking the first steps in reconciliation. That night at the party, Karen greets Trish, Hardin, and Tessa at the door with a big smile. She hugs Trish after they are introduced and then hugs Tessa. She watches as Ken and Trish hug for the first time in a decade.

She is by Ken's side the whole night and has an evident care for him. She excuses herself to check on dinner and returns when the meal is ready to serve. She is saddened when Trish has to leave early to catch her flight back to London, and offers to walk the woman out. Trish declines just as Hardin rejoins the group and begins arguing with Ken. Karen is visibly upset that Hardin chose to start something at the party, but stays silent while they argue.

Karen is a tall, slender, and attractive woman with shoulder-length, light brown hair, and brown eyes. She had a distinct nose and thin lips with a gentle way about her. She wore very high-end and classy clothing, preferring a white dress at her reception party. She has a kind and welcoming way about her.

Karen is extremely warm, welcoming and very accepting of new people into her life. She is a good mother to Landon and has a warm heart that she extended to Hardin, Tessa, and later Trish. 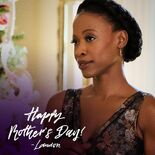 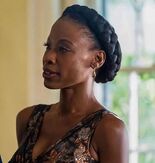 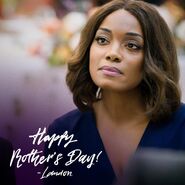