Khadijha Red Thunder is an American actress and model, best known for her role as Steph Jones in the After film series.

Khadijha is of Native American, Black, and Spanish descent. Growing up, beauty and self-love were important in her household. She began modeling at an unknown point in her life and began acting in 2019 after she landed the role of "Steph Jones" in the After film series. 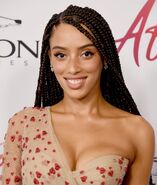