After We Fell, After Ever Happy

Kiana Madeira is a Canadian actress. She currently portrays Nora in the final two installments of the After film series.

Kiana was born in Toronto and raised in the suburbs of Mississauga, she wanted to be an actress from a young age. With the support of two young parents, she began auditioning at the age of ten and that same year got her first break in a series of educational films. Kiana then went on to star in Family Channel's sitcom series Really Me, multiple Disney Channel Original Movies including Harriet the Spy: Blog Wars, Bad Hair Day and The Swap.

Following her experiences in kid's comedy, Kiana was welcomed onto the SyFy network, acting in various films and shows including Dark Matter and Wynonna Earp. She recurred on CW's The Flash, and starred in the second season of the Netflix original series Trinkets.

In 2020, it was announced that Kiana had joined the cast of After We Fell and After Ever Happy, the final two installments in the After film series. She portrays Nora. 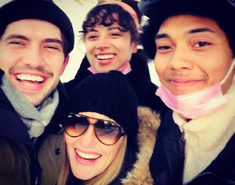 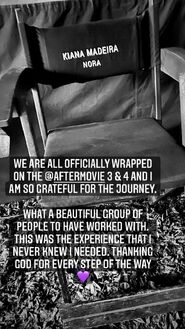