Landon Gibson is a character in the After film saga. He is portrayed by Shane Paul McGhie and later, by Chance Perdomo.

Landon is a kind and generous student at WCU, who becomes the best friend and confidante of Tessa. His recent brotherhood to Hardin gives him a unique perspective into their relationship.

Nothing is known about Landon's early life, but he eventually moved to Seattle to live with his mother Karen. They moved in with Karen's fiance, Ken Scott. Landon attended college at Washington Central University. He stayed out of trouble and kept on top of his studies.

Landon is leaning against the wall when a fellow student, Tessa Young, arrives and attempts to enter the classroom next to him. Landon explains that it's locked and that he tried already. A professor arrives a few moments later and unlocks the door for them. They both go to enter at the same time and take turns insisting that the other one go first. Landon told her that his mother raised him to be a gentleman, in which she finally concedes and enters first. They take their seats next to one another and talk about being freshmen in college and their majors. Tessa explains that she is an Econ major, while Landon says he an English major. They introduce themselves to one another as Landon Gibson and Tessa Young before focusing on the class that is starting.

Landon and Tessa befriend one another and he is her sounding board and a source of advice and wisdom when it comes to her relationship with Hardin Scott. Landon's insight on Hardin comes from them being impending stepbrothers, with Hardin's father set to marry Landon's mother, Karen. He warns her that Hardin is complicated and likes to play games by getting under people's skin. Tessa initially claims that she won't be bothered by Hardin's antics, though this idea quickly disappears when the pair bond. Landon discovers this for the first time when Hardin returns from the bonfire furious and yelling Tessa's name as he breaks things in the house. Desperate for help, Landon contacts Tessa to come over and see if she can talk Hardin down. By the time she arrives, however, Hardin's outburst has faded to sulking by the pool. Landon apologizes for bothering her but thought she might be able to calm him or would know what's wrong. She assures him that it's fine and goes outside to speak with Hardin.

In the days that followed, Landon continues to be supportive of Tessa but does warn her again that Hardin can be dangerous. Tessa insists that Hardin is different around her while Landon is a little more reluctant. He eventually concedes and they hug before she leaves to spend the day with Hardin. Landon is in attendance at his mother's wedding to Ken, and happily greets Hardin and Tessa, who arrive at the reception. Landon is willing to put the past behind them and welcomes Hardin as his brother, while the latter is still standoffish against Landon. Tessa, however, is grateful to Landon for the hospitality and promises to call him later that night. After Tessa learns about Hardin's betrayal, Landon is with her when she receives Hardin's letter.

Landon is out for a run and returns home to find Hardin outside on the hood of his car. Landon is confused to see Hardin, who wants to talk with him as he needs advice - he's that desperate. Landon scoffs at the insults, sarcastically responding that he thought Hardin was an imposter for a second there. Hardin tries to reason with Landon and calls him "bro", a term that Landon shuts down quickly. He reminds Hardin that he is the one who made it very clear that they aren't brothers. Landon presses that what Hardin did to Tessa is unforgivable. Hardin knows this and that he messed up, which is why he went to see her last night, but then he found out she kissed some guy, so he said that he slept with Molly even though he didn't. Landon is dumbfounded by what Hardin is saying, so he angrily tells him to forget it and goes back to his car. Landon asks Hardin if he really loves Tessa - no bullshit. Hardin doesn't even hesitate in his response - of course, he loves her, he's never felt this way about anyone before. Landon asks where he's going so Hardin tells him London - he was going to take Tessa with him but that isn't going to happen. Landon watches Hardin speed away in his car. He texts Tessa a few hours later to tell her about Hardin's visit, and that Hardin said he loves her and that he didn't sleep with Molly. Landon adds that he believes Hardin is telling the truth. She thanks him for telling her.

The next day, Landon goes for a ride in Tessa's new car, which he thinks is "very Tessa". She pulls into a parking lot where Landon's car is and parks next to him. She notices him on his phone and asks how his girlfriend, Dakota, is but he's really looking at her birthday horoscope. He reveals that she shares a birthday with Joseph Stalin and is a proud and idealistic person. He continues that she, "is more emotional then is obvious, may solidify romantic relationship or become involved with a mature partner". The mature part, he notes, doesn't sound like Hardin which Tessa agrees with. He tells her that Hardin left for London and asks if she's heard from him, to which she reveals that she blocked him. They say goodbye and he gets out of her car to get into his.

Landon is present at Ken and Karen's Christmas party. He greets Tessa at the door and hugs his friend, giving a pensive look toward Hardin. Ken socializes with Landon and some older guests, bragging about the boy's schooling and feats. When Hardin wanders into the dining room he sees an entire table covered with pictures of Ken with Landon and Karen. Landon then witnesses the argument between Ken and Hardin that unfolds that evening.

On New Year's Day, Landon learns of Tessa's car accident and storms into the apartment Hardin and Tessa share, shouting for Hardin. Landon stands close to Hardin as he asks what is wrong with him and how he could do this to Tessa. Hardin demands to know where Tessa is but Landon refuses to tell him, so much so, that he tackles Hardin to the floor. Hardin demands to know where Tessa is, so Landon rebuttals that it's Hardin's fault she crashed because he didn't come home last night. This freezes Hardin so Landon pushes Hardin off of him pressing that Tessa was out looking for Hardin when she crashed. Hardin doesn't believe him and grabs his phone and calls Tessa. Landon watches Hardin react to the phone call. Hardin hangs up and walks away while Landon calls after him.

Landon is of tall lanky build with black hair and deep brown eyes. He is fit and attractive with dress-casual clothing.

Landon is shy, smart, ambitious, caring, studious, wise, mature, and well-behaved. He goes through great lengths to be there for his loved ones. Sometimes, people can take advantage of how nice he is. He is a bit awkward and nerdy. 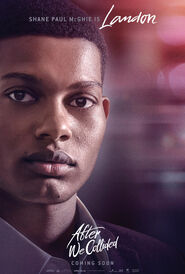 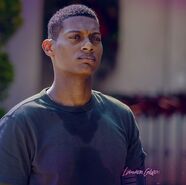 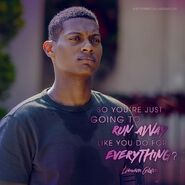 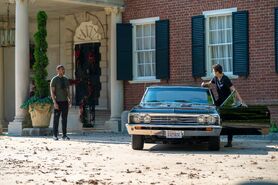 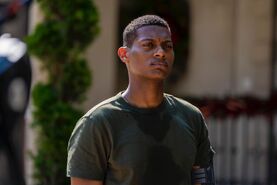 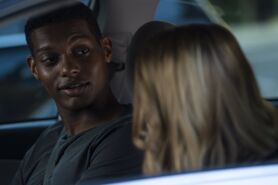 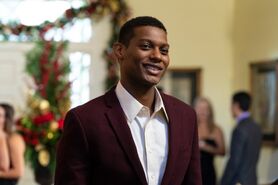 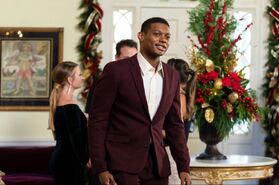 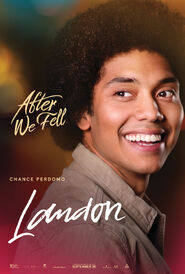 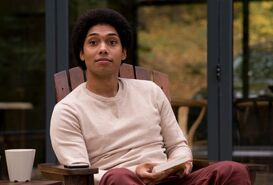