After Wiki
Register
Don't have an account?
Sign In
Advertisement
in: After Film Series, Cast, After Film Crew

Meadow Williams is an American actress and an executive equity producer on the romance-drama film, After. She portrayed Professor Soto in After. She did not reprise her role in the sequel, After We Collided.

Meadow Williams was born in Florida and raised in Tennessee on a large dairy farm. A modeling job got her a free trip to New York, where she studied acting and soon drove to Los Angeles. Meadow began acting work very quickly and continued working in television and movies. Currently, Meadow acts, writes, and produces in Los Angeles. 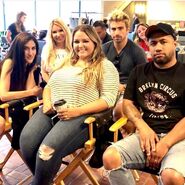