Trish Daniels is a character in the After film series. She is portrayed by Louise Lombard.

Trish is the geographically distant, yet concerned, mother of Hardin Scott. She travels to America to check on her son for the holidays. She soon becomes a warm motherly figure to Hardin's girlfriend, Tessa Young, as Tessa is struggling with her own complicated relationship with Hardin.

Trish met Ken Scott in England and they married and had a son together who they named Hardin. Her relationship with Ken was shrouded in anger and neglect, primarily due to Ken's alcoholism.

Eight years later, three men broke into her London home searching for her husband, Ken, who hadn't come home that night. She tried to fight off the attackers but was eventually restrained on the couch by two of the men. Her son heard the noise and came down to investigate. Trish freed herself and screamed at him to run away, and the boy froze in fear. He started to back away when a third man appeared behind him and forced him to stay in place. Hardin witnessed his mother being assaulted that night. Trish hoped that he would forget about the whole thing, but then he began to have vivid nightmares of the traumatic event. She took him to therapists and tried to get him help, but nothing she did worked.

After that, Trish separated from Ken. She and Hardin stayed with their family friend Christian Vance for a few years. When they moved back to their home, Hardin began self medicating with alcohol and fell into a bad crowd. She sent him away to America to attend Washington Central University, where her now ex-husband serves as the Chancellor.

Hardin mentioned Trish to his girlfriend, Tessa. He bitterly noted that the house Trish lived in back in London is nothing compared to Ken's lavish home. He also recounts a traumatic incident he witnessed when he was a child, of when men broke into their house looking for Ken but instead, found Trish, who was beaten as a result. Tessa was sympathetic to the woman.

Months later, during the Christmas season, Trish flew to Washington to visit her son for the holidays, after he claimed he couldn't make the trip himself. Upon arriving at Hardin's apartment, he offers to run her a bath and she recounts when they used to take baths together. Tessa suddenly shows herself in the doorframe, expecting Hardin to be with a girl and not his mother. She is shocked to see Hardin with his mother. Trish is surprised to see Tessa, saying that she thought Tessa would be out of town and they wouldn't get to meet each other. Tessa instantly smiles at the woman trying to be nice as they hug. Trish can't believe how pretty Tessa is, even though Hardin told her Tessa was the prettiest girl in the world. She gushes over Tessa which embarrasses Hardin but Trish brushes it off, saying that she and Tessa are going to be the best of friends. She then excuses herself to use the bathroom.

With Trish out of ear shot, Tessa questions Hardin as to why he didn't tell Trish they broke up, to which he explains that Trish was so excited when he told her that he couldn't ruin it for her. He couldn't tell her about the bet but doesn't expect Tessa to pretend they're still together. This takes Tessa by surprise and she's quiet for a moment before agreeing to play along, which elates him. He thanks her but she thanks him in return for the Kindle. He loudly curses then wishes her a happy birthday. Trish, who has returned, is excited at the prospect of celebrating Tessa's birthday and begs her to stay another night instead of going out of town to see her mom. Tessa is reluctant at first, but Trish presses that they don't know when they'll see each other again. She then agrees reluctantly and Trish hugs her again, promising to make her a homemade birthday cake.

They spend the rest of the night looking at baby pictures of Hardin, including one where his butt is exposed. Tessa teases Hardin that it is a cute bum, much to his horror. Hardin excuses himself to do the dishes. Trish asks about Tessa's schooling to which Tessa claims she's in the process of switching from an Economics major to an English major. She brings up her internship at Vance Publishing, which surprises Trish who knows Christian from years ago. They stayed with Vance for a few years after she separated from Ken. This is news to Tessa, who didn't know that Hardin knew Vance from before. When the night dwindles to an end, Hardin covers Trish, who fell asleep on the couch, with a blanket. The the morning, Tessa says goodbye to Trish as she's leaving to see her mother. Trish tells Tessa she is pleased to see Hardin so happy.

In the morning, Trish greets Tessa with a cup of tea and asks if Hardin is okay. Trish heard him last night, to which Tessa assure her that he's asleep now. She then asks Trish how long the nightmares have been going on. Trish explains they started when Hardin was eight. Trish begins to explain what happened that night, when Tessa cuts her off, saying that he told her about what happened and what he saw. Trish is surprised as he's never told anyone that before, becoming emotional. Tessa apologizes for what happened to her.

Trish was hoping Hardin would forget everything but then the nightmares started so she took him to therapists, but to no avail. He then started self-medicating with alcohol and sex. But he told her the nightmares went away when he started seeing Tessa. This takes Tessa by surprise, emotion creeping in, as she didn't know this. Trish asks why her mother hates Hardin so much, and Tessa reluctantly explains that he lied to her - a massive lie. The woman understands and asks if Hardin is sorry, to which Tessa believes that he is. Hardin awakens so Trish tells him to brush his teeth as she hands him a cup of tea. Tessa smiles saying that she loves his mom.

The next day, Trish is packing Christmas presents when she receives a call from Ken inviting her to his Christmas party at his house. She would only be able to stay for a few hours due to her plane leaving that evening, but agrees to make an appearance. She attends with Hardin and Tessa. Trish is astonished to see the size of Ken's house despite Hardin having told her it was massive. She curses over it but then knocks on the door. They are greeted by the warm smile of Karen, Ken's wife, and the women hug. A moment passes before Trish sees Ken across the entry way and the exchange a long look. She then crosses the threshold to give him a hug.

After a while, Trish tells Karen and Ken she has to leave early to catch her flight back to London, and Karen offers to walk the woman out. Trish declines just as Hardin rejoins the group. Ken start talking about his skiing adventures and the time he spent traveling, when Hardin snaps by asking what is wrong with Ken. Trish is visibly upset that Hardin chose to start something at the party, but stays silent while they argue. Ken migrates to speak with Trish, Karen, Landon, and Tessa who have gathered together near a doorway. She watches the fight that commences and shouts at Hardin when he punches Ken, catching the man as he stumbles backward from the impact of the punch.

Hardin follows Trish outside where he tries to get her stop. He apologizes for the incident but felt as though he had to do it. Trish scoffs as she unloads her bags from his car. He tells her not to get an Uber as he'll drive her to the airport. She scoffs that it won't happen after the shit he just pulled, plus he's drunk. Hardin claims that can't just move on and forget about everything that Ken did like she can. She stops and tells him that she hasn't forgotten anything, she chooses to forgive Ken for her own happiness. She warns him that resentments like this are going to ruin him and taking Tessa right down with him. She loads her things into the Uber and leaves.

Hardin returns to England in January, and wakes up screaming from another nightmare when Trish consoles him. A few days later, Hardin is on the couch when Trish brings him tea, asking how the applications are going. He explains that Ken would make some calls. Trish is surprised that Hardin spoke to Ken, and tries to tell him that what happened that night wasn't Ken's fault, but Hardin asks if all the other nights weren't Ken's fault either. She admits that it was shit and they both deserved better. But the only person Hardin is hurting by not forgiving Ken is himself, and she wants him to stop punishing himself. He doesn't think it's fair that Ken is living in a giant house while she's here alone. She quips back that she isn't alone much to his surprise that she's seeing someone. She explains that it's Mike, which he is shocked even more as Mike is a "wanker from next door". She tells him that Vance is having a going away party on Sunday and she thinks Hardin should "get his ass off this sofa and go get her". He tries to make excuses so she reminds him to start fighting for what really matters.

Trish is a beautiful woman with shoulder-length, wavy blonde hair and bright blue eyes. She has a slim physique and wears very stylish clothing. She usually pairs a pretty top with jeans, ankle boots, and a leather jacket. She has a confidence that is evident in the way she presents herself.

At her core, Trish is a kind and caring mother who loves her child. She is resilient and a survivor of the trauma she has endured throughout her life, though she chooses to show forgiveness instead of anger. When she does show anger, it typically stems from a place of disappointment. She is able to recognize her son's flaws and insecurities, showing how deeply she loves and cares for him. 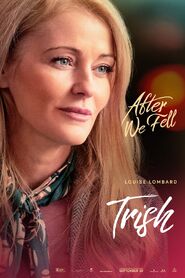 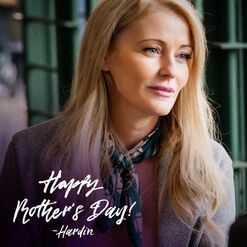