Zed Evans is a character in the After film saga. He is portrayed by Samuel Larsen.

Zed is the rebellious friend of Hardin Scott and a member of their circle of friends. He was aware of the bet and was aligned with Molly during the ordeal.

Zed is introduced as the fun and edgy friend of Hardin Scott. He is present at the frat party was drinking alcohol when Steph and Tristan introduced Tessa to the group. Zed takes a liking to Tessa who doesn't reciprocate his flirtations. He isn't thrilled at the idea of playing "truth or dare" as it never ends well. He's surprised when Tessa refuses to go through with her dare to kiss Hardin.

Hardin seemingly drifted from the group and was enthralled with Tessa, their relationship rapidly progressing. Zed, on his part, seemed to be watching the couple alongside Molly. He watched them banter in English class much to his and Molly's amusement. Much later, they watched Tessa and Hardin make out in the halls of WCU before disappearing into a dorm room. This time their amusement was more concerned and annoyed rather than enjoyment.

One day, Zed and Molly crash a lunch between Hardin and Tessa. Zed slides into the booth next to Tessa and flirts with her a little while Molly hangs on Hardin. The exchanges are uncomfortable for Hardin, who tells Tessa to wait in the car for him. She is hesitant but obliges, with Zed standing up so she can leave. When Tessa is out of earshot, Zed and Hardin begin arguing with Molly chiming in with the argument. Hardin abruptly leaves while Zed and Molly continue to banter.

Zed attends a bonfire with his friends a few nights later, where he complains to Steph and Tristan about their PDA. The group sits on a log a few spots away from Tessa, with Zed begrudgingly sitting next to Tristan. The group decides to play a game where they pass a card to one another using only their lips. Zed is successful in taking it from a stranger and transferring it to Tristan, who in turn, passes it to Steph. Zed witnesses Hardin's brawl with Jace when the latter refuses to leave Tessa alone. Zed springs into action and helps to pull Hardin and Jace apart, trying to calm Hardin but is unsuccessful as the boy runs off.

One night, Molly's incessant texting with Hardin raised a red flag for Tessa who confronted her boyfriend, who blew her off before breezing off to meet his friends. Molly noticed Tessa enter the cafe in which the group was meeting and toyed with her much to Zed's discomfort. He tries to distract Tessa but Tessa demanded that Hardin explain what is going on between him and Molly, to which Molly retorted that something is going on, but not what Tessa thinks. Hardin sharply tells Molly to shut up but she ignores him and asks if she remembers truth or dare. Zed tells Molly to stop and not to do this, but she merely glares at him so he quiets down. She then shows Tessa the recording she made in which Hardin made a bet with his friends that he could make Tessa fall in love with him. Then, after she's in love, he would turn his charm off and break her heart. The aftermath of the reveal left Zed on the outs with Hardin, but he continued to hang around the others.

Over the next month, Zed continued to hang around the frat house and drink. Zed, who is watching Steph take a body shot off Tristan, greets Hardin when he returns to the frat house. After some banter, Zed offers Hardin a shot of liquor that he takes without hesitation. Steph looks up from taking body shots off Tristan to ask Hardin if he missed her, and both men give her a pensive look in response. The group moves into the living area to sit and talk. They are joined by Molly who is still having problems with Hardin, leaving Zed and the others to watch the spectacle that the duo make.

Zed attends the New Years Eve party at the WCU frat house. He attends with his girlfriend, Ally. They are playing beer pong opposite Steph and Tristan. Zed misses his shot and curses loudly but she tells him it's okay so he instantly apologizes and kisses her. Hardin and Tessa arrive moments later, so Ally offers to switch out with Tessa for the next round. Zed asks Tessa if she knows how to play, to which she quips that she has no clue what she's doing. He is exasperated with her enthusiasm over missing the cup and puts his head in his hand. When the beer pong game is over, he dances with Ally in the same area as Tessa, Tristan, and Steph. He is unbothered by Molly's explosive outburst upon seeing Tessa at the party.

Later that night, Zed and Ally sit in a large brown chair with her tracing his chest tattoo as she likes it. She teases him that she has a tattoo but she has to be naked for him to see it. He kisses her just as Molly walks over and demands they move out of her chair so she can sit. Zed is hesitant to oblige but he caves in to avoid a fight, and they sit on the couch instead. Ally sits on his lap happily. Tessa and Hardin sit on the couch, and Tessa instantly begins some banter with Molly. Ally was confused as to why Zed was opposed to the girls playing Truth or Dare. He brushed it off as a long story. He watches Molly and Tessa bickering, with Ally asking him if they didn't like each other. When Tessa tackled Molly, he jumped up with Ally to witness the brawl. After the fight, he tries to talk with Molly who angrily shoves him out of her way as she storms off.

Zed has olive skin, dark hair, and dark eyes. He has many tattoos and a nose ring. His style is very relaxed with minimal accessories. The only piece of jewelry he wears is a heavy chain necklace with a lock attached.

Zed is a very laid back and friendly guy. He has trouble with English class, something that he tried to get Tessa to help him with. 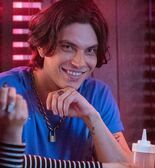 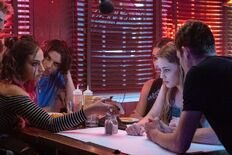 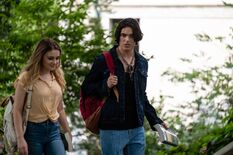 Zed in a deleted scene